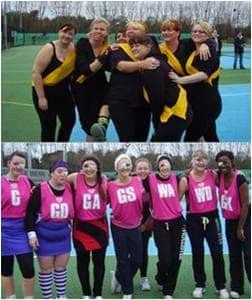 On Tuesday 27th December, after a last-minute change of venue, the highly anticipated charity netball match took place at Fleming Park between The Wasps and The Ravens.

“The Wasps” netball team was formed in November 2011 after a night out on the town, when this fantastic group of ladies decided to train together once a week with a view to challenging seasoned-pros, “The Ravens”, to a charity netball match. The Wasps are a combination of friends and family, and some haven’t trained or played netball for nearly 30 years.

To even the odds in the third round, The Ravens were made to put on eye patches (see pic), but they didn’t stay put for long. After more attempts at slowing down the opposition, The Wasps did hold their own and the match ended 13-11 to The Ravens.

Encouraged by The Wasps efforts in the match, the men also fancied a shot at The Ravens and a further 2 rounds were played. Pictures are available on our Facebook page!

A fantastic show of support from friends and family on the day, along with the player’s pre-match sponsorship, brought the event’s fundraising total to nearly £1200! It was a fantastic effort from all involved, and there is now plenty of time for The Wasps to launch a come-back in 2012.

Any cookies that may not be particularly necessary for the website to function and is used specifically to collect user personal data via analytics, ads, other embedded contents are termed as non-necessary cookies. It is mandatory to procure user consent prior to running these cookies on your website.